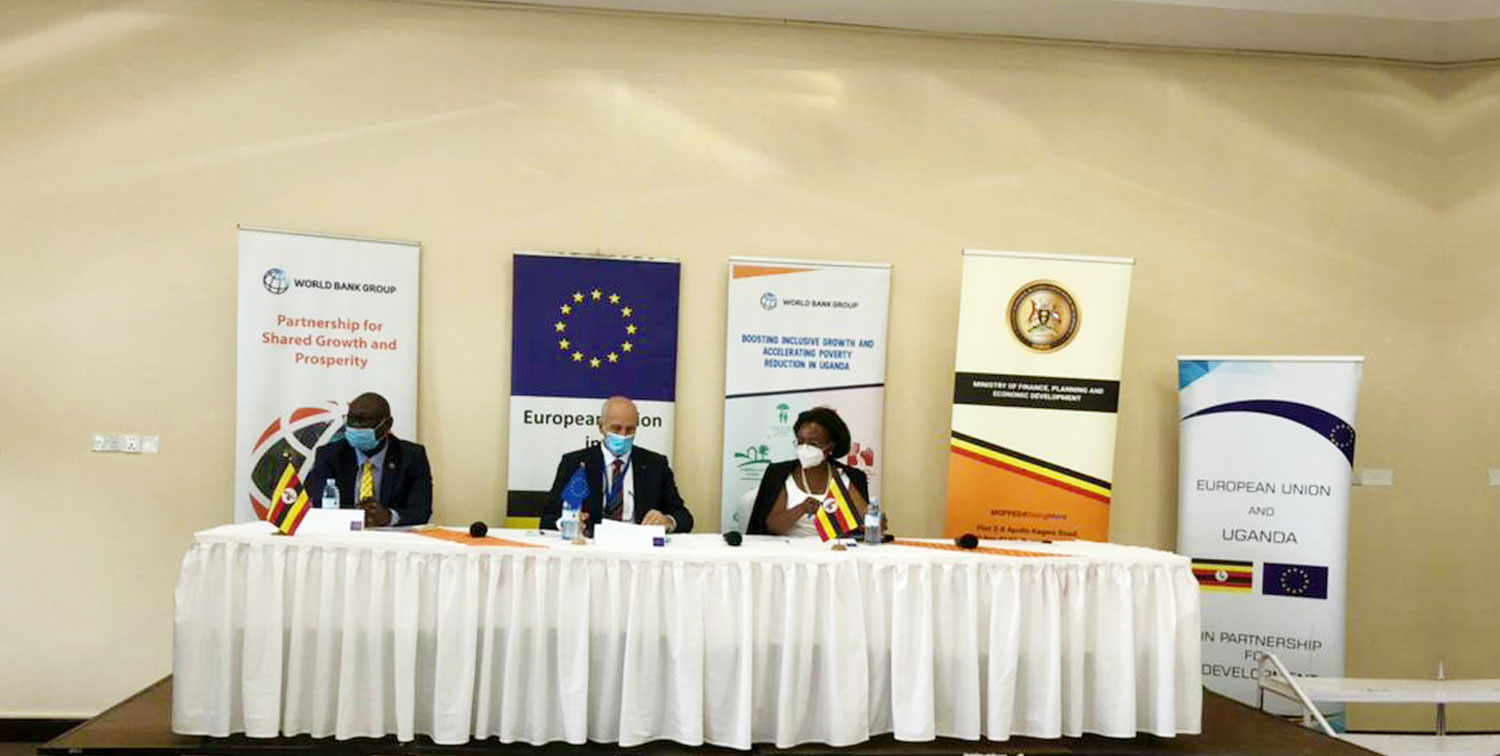 Kampala, March 31, 2022 –The World Bank and the European Commission on behalf of the European Union (EU) signed a partnership agreement providing eight million Euros (US$ 9.03 million or UGX 31.8 billion) grant to support the Government of Uganda to strengthen land tenure security, land administration and management systems in northern and eastern Uganda.

The grant will be disbursed over a four-year period through the World Bank-administered Multi-Donor Trust Fund (MDTF) that mobilizes donor contributions and invests in strategic areas to promote an effective implementation of Uganda’s national development plans and priorities to achieve the national Vision 2040.

The EU grant will support MDTF activities that aim at strengthening land administration and management systems, providing land tenure security, and addressing land disputes. The project will focus on implementing Systematic Land Adjudication and Certification (SLAAC) process for customary lands and selected peri-urban areas in the northern and eastern regions where most of the unregistered land is located.

“This European Union support will enhance security of land rights by consolidating the demarcation and documentation of individually and communally owned customary lands while ensuring inclusion of vulnerable people of both genders,” said European Union Ambassador to Uganda, H.E Attilio Pacifici.

“This funding will complement activities to modernize and scale up the land administration system in Uganda, currently being supported under the World Bank-funded US$ 200 million Competitiveness and Enterprise Development Project,” said Ms. Mukami Kariuki, World Bank Country Manager for Uganda. The activities will speed up the provision of land ownership and use documents to Ugandans, allowing them to enjoy better land tenure security and leverage the economic potential of land assets.

The Ministry of Lands, Housing and Urban Development is the key counterpart in implementation of the activities under this grant. The financing will strengthen the ministry’s ability to scale up SLAAC by automating procedures for issuance of Customary Certificates of Ownership (CCOs) to process and to deliver officially recognized land ownership and use documents to men and women in northern and eastern Uganda.

“The Government of Uganda welcomes the additional support from the European Union through the World Bank to strengthen land tenure administration and management systems,” said Ms. Judith Nabakooba, Minister of Lands, Housing and Urban Development. “Your efforts to support Uganda’s land administration reforms will complement implementation of government initiatives under the Parish Development Model aimed at moving peasants from the informal economy to the market economy using their land to support them.”

The World Bank Group, one of the largest sources of funding and knowledge for developing countries, is taking broad, fast action to help developing countries strengthen their pandemic response.In Uganda, the World Bank has an active International Development Association portfolio consisting of 26 operations (21 national and 5 regional) with net commitments of over $4.23 billion. It has 11active Advisory Services and Analytics operations, and 83 active global Trust Fund operations.

The European Union is a unique political and economic partnership between 27 European countries. Together, the European Union and its Member States are Uganda’s biggest development partner. The EU Delegation to Uganda supports Uganda’s efforts to promote democratic governance, fight corruption and improve peace and security in the East Africa region. The European Union is a key multilateral, development and trade partner of Uganda, working to improve green growth and the investment climate in Uganda to create decent jobs. Current EU programming for Uganda covers a 7-year period (2021-2028) and is directed towards three broad policy areas (i) Green Partnerships, (ii) Sustainable Growth and Jobs, and (iii) Democratic Governance and Social Inclusion.

Over 312 enterprises benefit FROM CEDP

CEDP Intervention to Improve Access and Security of Land